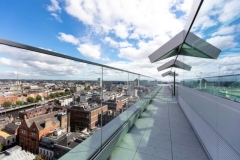 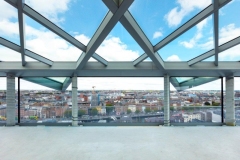 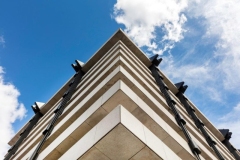 The former Central Bank building was designed by award winning architect Sam Stephenson and opened in the late 1970’s to mixed reviews, it’s distinctive design has become one of Dublin city’s most striking buildings. Situated on a public plaza bound by Dame Street, Fownes Street Upper and Cope Street, the freestanding multi-bay 7 floor suspended tower over 2 level basement structure, is set back from Dame Street to the north of the plaza.

This iconic landmark project was undertaken on a Construction Management basis by Stewart Construction and completed to LEED Gold standard, and saw the building’s exterior remaining largely preserved. Works included the refurbishment of the 7 stories of offices contained in the Tower Building and all enabling works required, the refurbishment and upgrade of the existing entrance foyer of the Tower Building, the provision of 2 new car park lift cores, reconfiguration of existing basement -2 level to include additional car parking spaces and secure storage for bicycles.

The top-most level of the Tower, the crowning glory of Central Plaza, was re-imagined as a glass-roofed, split level hospitality space incorporating a 360° viewing terrace around the entire perimeter of the building, with a breath-taking view of Dublin’s city scape.

The façade restoration included replacement of all existing glazing, cleaning to existing granite cladding and full upgrade, refurbishment, and over-cladding of the Macalloy structural suspension system.

In addition, and a major focal point of Central Plaza, a new plaza area was created with units for retail, cafes and restaurants at terrace, plaza and sub-plaza level, including a new glazed twin-lift core and reconfigure feature staircases.

Included in the overall development was works to the existing Annex and ‘Commercial Buildings’.

This is the second project Stewart Construction has undertaken in conjunction with Hines, a major player in global real estate investment.