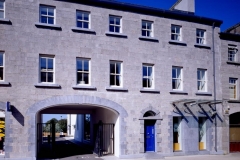 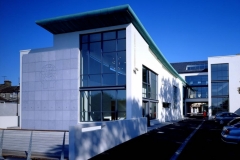 Project Description:
Build new 4 Storey Office Building – Retain Original Façade The Credit Union purchased an old stone building on Main Street Ballinrobe. The old building was totally demolished and the buildings each side had temporary flying shores installed to maintain their stability during construction of the new building. The front wall stonework was demolished and re-built, every stone being marked for re-building, satisfactorily restoring the original front to the building with limited alterations for new access arrangements. Behind the facade, a new three and four storey modern office building was constructed to a very high specification, both for the Credit Union and for part letting to suitable tenant. The roof of the building fronting on Main Street was clad in natural slates, tying into the adjacent existing buildings.

Client: The League of Credit Unions of Ireland